Hello Relatives, my name is Royal Lost His Blanket-Stone, Jr., I am from the Red Cloud Clan of the Bear Face Band, I am also of the Kit Fox Society, I am part Rosebud Sioux (Sicangu Lakota) and Oglala Sioux Lakota. I am an enrolled member of the Rosebud Sioux Tribe / Sicangu Lakota Nation. My parents are the late Itancan Roy Stone, Sr. and Diana R. (Short Bull) Stone. With a good heart, I shake all your hands.

I also graduated from the University of Minnesota (Duluth) with an MTAG - Masters in Tribal Administration and Governance on May 8, 2021; and will continue on with my educational endeavours. I am currently enrolled in the Ed.D - Doctor of Education program at the University of Nebraska-Lincoln.

When I set my goals, I always to do my best to achieve them. I have come this far in my educational goals and I continue to move forward, if there is something I do not know, I can learn and develop within my profession. I am currently the Chairperson/Director of the Lakota Studies Department at Sinte Gleska University, Mission, South Dakota. 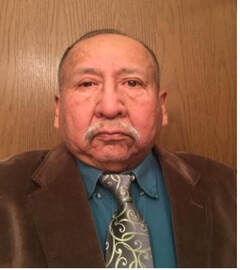 Richard has  received an Honorary Doctorate in Humanities from New College in San Francisco, California in 1999.  Richard recieved a Luce Fellowship Award 2020 for his work with community and families during the pademic era. Richard recieved the Strong Buffalo award 2021 for his community services.

Work history;
He has worked as a Social worker, substance abuse counselor, traditional and spiritual consultant and as a cultural adviser with several different agencies, reservations, and community projects both in South Dakota and outside the state.
Mr. Moves Camp provided expert testimony to the Senate Sub- Committee on Indian Affairs to support the enactment of the Freedom of Indian Religious Act in 1978. He was also one of two spiritual leaders to advocate for the Lakota traditional sweat lodge to be implemented at the South Dakota State Penitentiary in 1976.
His knowledge of healing practices includes plant properties and remedies for use in healing ceremonies to prevent, treat, and recover from illness. He lives with his family in Pine Ridge, South Dakota.
Richard is a proud grandfather, Father and husband for forty-one years. His wife Arvella takes care of their home while Richard does his work in the community and national and international community.

Back To Lakota Studies