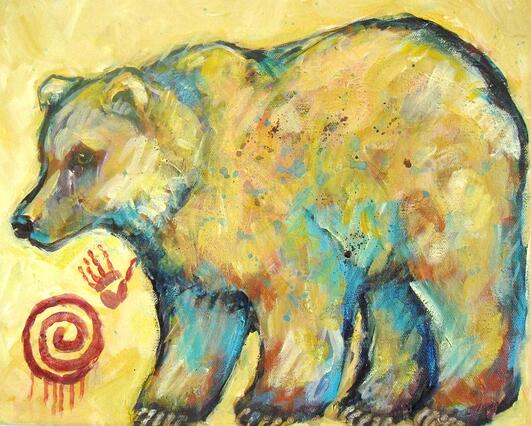 How Bear Lost His Tail

Back in the old days, Mato (Bear) had a tail which was his proudest possession. It was long and black and glossy, and Bear used to wave it around just so that people would look at it. Fox saw this.

Fox, as everyone knows, is a trickster and likes nothing better than fooling others. So it was that he decided to play a trick on Bear.

It was the time of year when waníȟeyuŋka (the Spirit of Frost), had swept across the land.

On a lake, Fox made a hole in the ice, right near the place where Bear liked to walk. When Bear was walking by, he saw Fox sitting on the iced Lake with his tail in the hole. Just when Bear was about to ask Fox what he was doing, Fox twitched his tail which he had sticking through that hole in the ice and pulled out a huge trout.

Fox said, “Greetings, Brother, how are you this fine day?”


Bear answered, “Greetings,” while looking at the big circle of fish, and said “I am well, Brother. But what are you doing?”

Fox answered, “I am fishing, would you like to try?”


Bear said, “Oh, yes”, as he started to walk over to Fox’s fishing hole.

Fox stopped him and said, “wait, Brother, this place will not be good, I have already caught all the fish, let us make a new fishing spot where you can catch fish.”

Bear agreed and so he followed Fox to the new place, a place where, as Fox knew very well, the lake was too shallow to catch the winter fish (which the fish always stayed in the deepest water when waníȟeyuŋka has covered the lake).

Bear watched as Fox made the hole in the ice, thinking of the fish he would soon catch.

Fox said, “now, you must do just as I tell you, clear your mind of all thoughts of the fish, do not even think of a song or the fish will hear you, turn your back to the hole and place your tail inside the hole, and soon a fish will come to grab your tail and you can pull the fish out.”

Bear asked, “but how will I know if a fish has grabbed my tail if my back is turned?”.

Fox said, “I will hide over here where the fish cannot see me, and when a fish grabs your tail, I will shout, then you must pull as hard as you can to catch your fish, but you must be very patient, do not move at all until I tell you.”

Bear agreed and said, “I will do exactly as you say”. Bear sat down next to the hole, placed his long beautiful black tail in the icy water and turned his back.

Fox watched for a time to make sure that Bear was doing as he was told and then, very quietly, sneaked back to his own house and went to bed. The next morning, he woke up and thought of Bear. Fox said to himself, “I wonder if he is still there, I’ll just go and check.”

Fox went back to the ice-covered lake. He saw what looked like a little white hill in the middle of the ice. It had snowed during the night and covered Bear, who had fallen asleep while waiting for Fox to tell him to pull his tail and catch a fish. And Bear was snoring. His snores were so loud that the ice was shaking. It was so funny, and Fox rolled with laughter. But when he finished laughing, he decided the time had come to wake up Bear.

He walked slowly toward Bear, and very close to Bear’s ear, and then shouted: “Now, Bear!!!”

Bear moaned, “ohhh Fox, I will get you for this”. But Fox, even though he was having a laughing fit, he was still faster than Bear and he leaped aside and was gone.


Now, it is to this day, Bears have short tails and no friendliness at all for Fox. And if you ever hear a bear moaning / growling, it is because he remembers the trick Fox played on him long ago and he is mourning for his lost tail and still searching for Fox.